In this article, we will give you complete insight of Punjabi wedding rituals - Pre and Post-wedding ceremonies, traditions and much more.

Remember the song – “Punjabi wedding dance” from Hasee tho Phasee? The typical Punjabi wedding is a combination of laughter, fun, flamboyant music, dance, sangeet and what not. They are exuberant people who love to express their emotion with lots of passion. Like their nature, Punjabi weddings also reflect their life’s philosophy of living it to the fullest. Simple or luxurious, Punjabis ensure that the weddings are full of unlimited fun and celebration. The entire pre and post wedding rituals make a Punjabi wedding a long-lasting and pleasurable affair.

So here is the complete Punjabi pre and post-wedding rituals.

Once the horoscope and compatibility between both the parties are satisfactory, the bride’s family visit the groom’s place to shower blessings along with various gifts for him and his family. Gifts include like fruits, sweets, clothes, money etc. called Shagun. This custom is known as the Roka.

The bride will not be present at the Roka. The groom’s family reciprocates to this gesture by visiting the bride’s home on a separate day with gifts for her and her family. This return ceremony is known as Thaka.

Roka and Thaka are low-key affairs and only close family attend this function. The Roka ceremony indicates the beginning of a new relationship between the two families which is initiated with a small puja called Ardaas.

This is often a grand ceremony that symbolizes the official engagement between two lovely people and is conducted a few months before the wedding. Friends and family gather from both the families’ side. The bride is fed with boiled rice and milk by the groom's family. In this celebratory moment, the couple exchanges rings. The Sagai ceremony is to officialize the match.

To signify the acceptance of the bride into the groom’s family, a group of ladies visit the bride’s house on the morning of the engagement or a day before. They bring an outfit which the bride has to wear for the Sagai along with the jewels, sweets, fruit, mawa etc. The highlight of the gift is an intricately designed head scarf or Chunni. This Chunni is placed on the bride’s head and her face is covered like a veil. This ceremony is known as Chunni Chadana. She is also gifted jewelries such as bangles or necklaces from the groom’s family legacy by her mother-in-law. These gifts are called Shagun. A small dot of henna is applied on her palm to mark this auspicious ceremony.

Amongst the many Punjabi wedding rituals include musical party arranged by the bride’s family, Sangeet is a traditional occasion where the ladies, sit near the bride and sing folk songs, tease the bride, and dance around. Even the groom and his family members are invited to participate. In today’s lives, the sangeet is a grand event where both the families indulge to have a fun-filled evening. Groups from both sides also present dance performances to Bollywood songs usually choreographed by professionals. It’s a fantastic opportunity for the families to get to know each other. 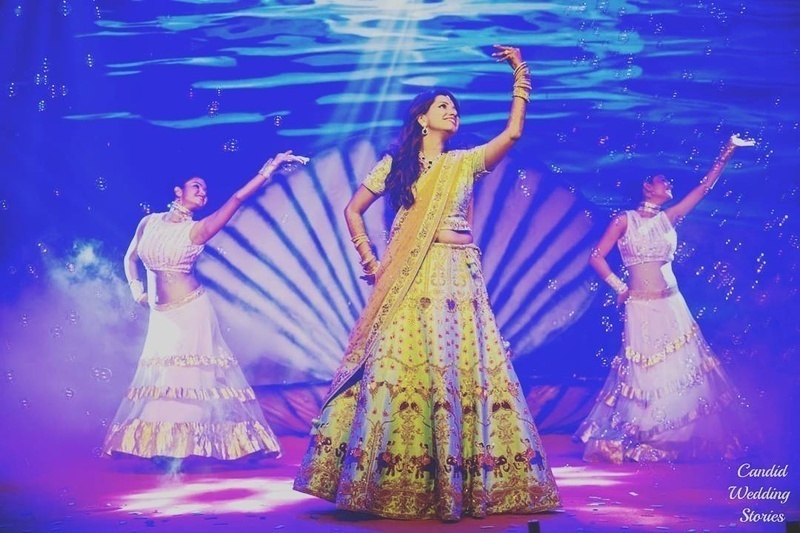 Mehendi is an unavoidable ritual in any wedding and especially Punjabi wedding ceremony. Intricate patterns of henna designs are applied to the bride’s hand and feet and even the groom’s initials are hidden amidst these patterns. Once the designs dry up, it gives out a dark red color. It is believed that the darker the color of the mehendi, the more love the bride will receive from her husband’s home.

Traditionally, family members used to apply henna paste but nowadays professional mehendi artists are hired. Even at the groom’s home, mehendi ceremony is performed but at a smaller scale. Traditional wedding songs are sung throughout the entire ceremony.

This ritual is conducted the night before the wedding. The family stays up till late at night. Jago is celebrated at early hours of the morning. A brass or copper Khada is decorated with clay lamps. The maternal aunt or Mami of the bride/groom carries this vessel on her head as another lady tries to shake it using a long stick with bells attached to it. The ladies sing Punjabi wedding songs and visit houses of friends and relatives who offer them confectionaries. Together, they dance before moving on to the next house.

This happens on the morning of the wedding day at the bride and groom’s respective houses. They attend a puja and on completion of the pooja, the priest ties a sacred thread called Mouli to their right wrists. The Mouli is tied around a betel nut and a shell called Kaudi. It is knotted numerous times around the wrists making it difficult to untie it later.

Chooda refers to a set of red and ivory bangles. The eldest maternal uncle gifts a set of 21 bangles to the bride. The maternal uncle of the bride has an important role to play in this ritual. He sits for the Havan (sacred fire) during which the Chooda is purified in liquid mixture containing milk and rose petals. These bangles are instantly shielded with a white cloth as the bride is not supposed to see them. It is believed that seeing the bangles before the wedding may bring upon bad luck. Later on, the maternal uncle and his wife slip on the chooda on the bride’s hands. As per tradition, the bride wears these bangles for a month after her wedding.

This function is related to the Chooda ceremony. It takes place immediately after the bride wears the bangles. It is a gold-coloured accessory that not only makes the bride look stylish but also denotes a happy married life and fertility. These Kaleeras are enveloped with betel nuts or dried fruits. During the ritual, the bride is supposed to shake the kaleeras over the head of an unmarried girl, who she wishes to see married next. If the fruit or betel nut falls over her head, it is believed that she will is likely to get married next. This ceremony takes place a day earlier or on the morning of the wedding. A paste of sandalwood, turmeric, rosewater and mustard oil is made and is applied all over the bride’s body especially face, hands and feet. A similar ceremony is also observed at the groom’s house. Nowadays, people club it together so that the bride and groom are seated together while friends and family smear Haldi on the couple. This is a fun ritual that incorporates dancing, song and absolute entertainment.

After the Haldi ceremony is completed, the bride goes to the nearbly temple to take a dip in the holy water. She enters the sanctum sanctorum to seek the God’s blessings. A similar ritual is held at the groom’s home.

As the wedding ceremony commences, the groom and his family dress up and assemble for a small pooja. The turban and the Sehra is blessed by the priest during this pooja which is then tied around the groom’s head by an elder male member or his brother-in-law.

The traditional Punjabi baaraat includes the groom who arrives at the wedding venue riding a horse (or mare). The family members and friends dance in front of the baaraat. The mare is fed with mixture of chickpeas and jaggery before commencing the baaraat.

A short and sweet ceremony, in this Punjabi wedding ritual, the bride and groom exchange garlands after which the wedding ritual commences. 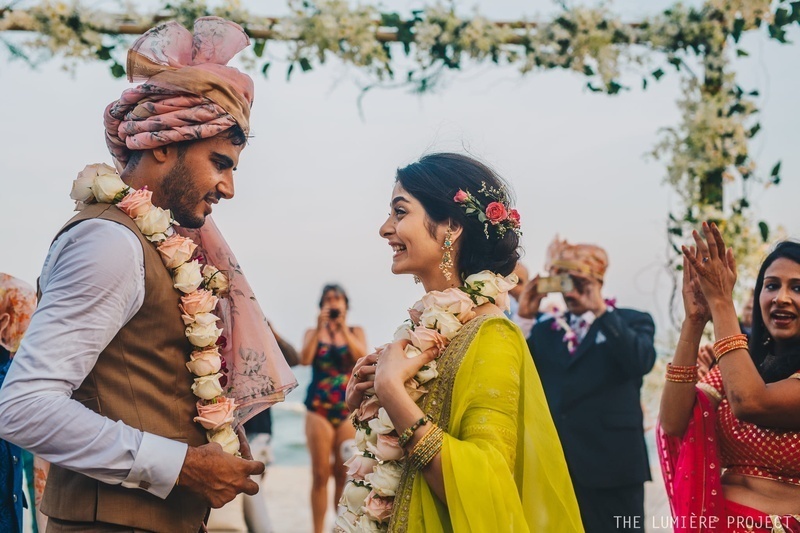 An old Vedic tradition, after the Jaimala the bride and groom sit around the fire. The groom is given a bowl of water which he sprinkles on his feet, his body and around him. After this, the groom is given a special concoction that is made of ghee, curd, honey and other sacred essences. This is called Madhuperka. He sprinkles some in all directions before taking a sip.

An emotional and sentimental ceremony, the father of the bride gives his hand to the hands of the groom and asks her to treat her with love, care and respect.

Also known as Saat Pheras, the couple circles around the sacred fire seven times. While the bride leads the first three rounds, the groom leads the last four. Each and every round has symbolical meaning and the couple should recite the vows to have a happy married life. After the saat pheras, the priest declares them husband and wife.

Once the pheras are over, the groom applies Sindoor (vermillion) on the bride’s forehead and her hair partition (Maang). The significance of Sindoor is that the bride and groom are now husband and wife for the next seven lifetimes.

While the groom is busy with the ceremonial rituals, the bride’s sister and her friends hide his shoes and demand a ransom from him, if he wants his shoes back. This is a fun and amusing ritual where after lot of bargaining, the two parties come to an agreement. The groom pays a specific amount for his shoes.

A heart-wrenching part of the Punjabi wedding ceremony is the Vidaai where the bride bids adieu to her family. She throws a handful of rice over her shoulder expressing gratitude towards them for raising her and taking care of her. She sits in a decorated car to her husband’s home. As the newlywed arrive home, the groom’s mother does an Aarti using a pitcher of water. After each circle, the mother-in-law attempts to take a sip of water, but the bride prevents her until the seventh circle. The bride crosses the threshold and then overturns a pot of rice with her right feet and enters her new home.

Firstly, the couple seek blessings from the family deities. The bride is seated and her veil is lifted in front of family and friends so that everyone can see her face. The elders then shower their blessings and give gifts of cash and jewelry to the bride.

The groom’s family throws a lavish reception party in honor of the newlyweds. A Punjabi reception is an event of immense joy with delectable meals and high-spirited music.

Last among the Punjabi wedding rituals is Pag Phera. A day after the wedding, the newlyweds are invited to the bride’s family for a small get-together and dinner. The parents and close family members welcome their daughter and son-in-law with a grand lunch. The couple spend the night at her parent’s place. The next day, they return to husband’s home with a lot of gifts for her in-laws. This marks the end of the wedding celebrations.

In this article, we share Balloon Wedding Decoration Ideas you can use on your Indian wedding. Balloons are not just for ...