Let’s take a look at the Jain wedding rituals, its tradition, customs and what makes this wedding an amalgamation of the spiritual and earthly ceremony.

Jainism is one of the prominent religions practised in India. Did you know that Maharashtra has the largest Jain population among all Indian states with Rajasthan at second place? A peace-loving community with spirituality guiding the traditions, Jain weddings are simple yet deep with intricate rituals that are governed by the Vivah Vidhi dictated by their scriptures (Agamas).

The Jain community in India are the oldest followers of the Sramana traditions and follow the faith laid down by the 24 Tirthankars. A business-oriented community, Jains are widespread not only among the country but outside India as well. There are more than 110 sub-cultural sects of Jain community. The group is close-knit and holds strong values to family while approaching life with simplicity and modesty.

A strong celebration of family and friends, here are the common traditions of Jain wedding. While the customs may differ, the core values remain the same.


In Marwari Jain communities such as Agarwals, Khol Barana and Tikka rituals mark the beginning of pre-wedding rituals in Jain communities. Once the alliance is confirmed, the groom’s family visits the bride’s family. They gift her a silver plate with coconut and some cash as a Shagun. This ritual is called Khol Barana. Similarly, the bride’s family visits the groom’s house with gifts and this ritual is called Tilak or Tikka ceremony. 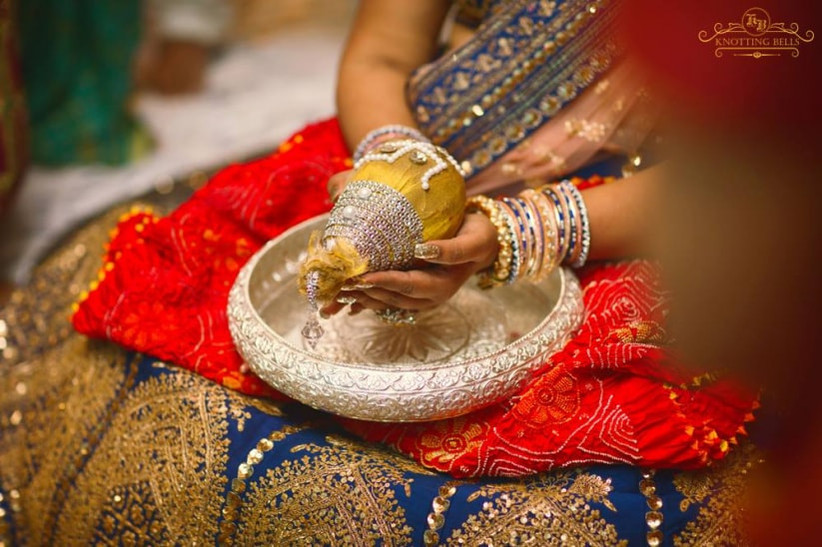 
A Jain marriage ceremony where the wedding date is decided after a Puja is conducted at the bride’s place. After checking the horoscopes of the bride and groom, a precise date and time is fixed for the wedding.


This is an interesting ceremony in the Jain community. A formal letter is drafted that contains the Muhurat of the wedding. This letter is sent to the groom’s house. The groom conducts a Vinayak Yantra Puja and the letter is opened. The Pandit reads it aloud to all the family members and relatives to hear. This ceremony is called Lagna Patrika Vachan.


Though the main event of the Mehendi ceremony remains the same, rituals of Jain marriage are slightly different. For instance, the Mehendi function is more of a homely affair with only a few close friends and family members arrive for the function. A fun event, the bride’s hands and feet are applied with intricate henna designs.


Resembling Jain marriage, this Haldi ceremony is called Bana Betai. That said, in this function, instead of Haldi or turmeric paste generally used, the bride and the groom are applied chickpea paste or besan which is followed with a ritualistic bath. Discarded clothes are given away.


On the wedding day, before the Muhurat of the wedding, a special pooja is conducted by the Pandit to sanctify the Mandap where the wedding will take place. This is called Mada Mandap.


The Ghudchadi is where the groom mounts on the horse. This initiates the start of the wedding procession which begins from the groom’s house to the wedding venue. The families of the groom’s family tighten the headgear and apply Tilak on the groom’s forehead before the Baaraat begins.


We think that Baaraat is the wedding procession of the groom. However, as per Jain rituals, Baaraati is the welcome of the procession by the bride’s family. The bride’s brother also gives a welcome gift to the bride that contains coconuts, sweets, clothes and other things.


The bride’s mother sings traditional songs while other married females of the house perform an Aarti and apply Tilak on the groom’s forehead welcoming him to the venue.


Known as “Kanyadaan” in Hindi, it is an emotional moment for the parents and the bride as they give away their daughter to the groom. The bride is brought to the wedding mandap. The bride’s parents place one rupee and twenty-five paisa with some rice on the bride’s right palm. They offer her hand to the groom who takes her hand as the father proclaims publicly that his daughter is being married to the groom. The Pandit chants mantras while pouring water thrice over the couple’s hands.


Gath Bandhan or Granthi Bandhan is where the pallu of the bride’s saree is tied into a knot to the groom’s clothes as they prepare for the Saat Pheras.


As the couple circle the sacred fire, Mahaveerashtak Strotra is recited by the Pandit and the guests participate in singing the Mangal Geets. The Saat Pheras are followed by taking Sevens vows of the wedding just like other Hindu wedding rituals.

The bride then sits on the left side of the groom and is now designated as a Vamangi. This means that she is now the better half of her husband. The couple also exchange Jaimala or Varmalas and this concludes the Jain wedding rituals.


After the wedding rituals are completed, the couple seeks blessings from the elders of both the families.


A tearful moment where the bride leaves her home she grew up in and leaves to mark a new beginning of her life at her husband’s home.


This is a post-wedding ritual that is unique to the Jain community. The couple visits a Jain temple with their respective families and distributes alms to the poor. It is a gesture of expressing gratitude to God for successful completion of the wedding rituals and receive blessings from the Almighty. 
The groom’s family holds a grand reception a day or two after the wedding where the extended friends and family arrive and bless the couple.

Your best friend is about to get hitched which means that his days of singlehood are coming to an end, but you don’t ...

A typical Indian wedding is an amalgamation of various musical instruments. While Wedding music in North India is dominated b ...