In this guide, we will give you complete detailed Bengali Hindu Wedding Rituals.

If you had the good fortune of witnessing a Bengali wedding from the start to the end, you will certainly agree that it is a visual delight of happiness and divinity. Bengali Hindu marriage is just like any other Indian weddings – a blend of traditional customs, rituals with a hint of contemporary variations.

Bengali weddings, also referred to as “Biye” is a visual delight. Combined with the spirit of extravagant colours and vivacious decorations lies the deep, meaningful rituals that build the culture.

As lavish the Bengali wedding is, the rituals need perfect planning and careful precision. The 2-3 days elaborate wedding can also be physically demanding to everyone, especially the bride and the groom.

Here are some of the common rituals and ceremonies you will notice in Bengali weddings.

Bengali wedding rituals begin a few months before the actual wedding. While some of them may have become outdated with changing times, others are still religiously followed. 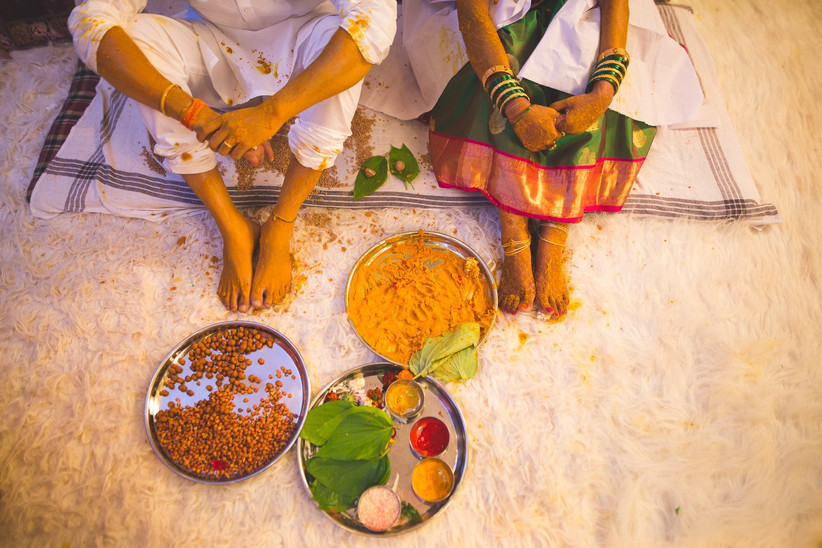 
Even with the presence of online matrimonial sites, our Indian tradition is such that the families meet together at a venue with Pandits to fix an auspicious marriage date, after consent from the bride and groom and horoscope compatibility.


This concept is similar to the bridal shower or bachelor party connected with Christian weddings. Friends, neighbors and close relatives gather at the respective houses of the bride/groom to throw a lavish celebration to have fun and celebrate last day as a bachelor/bachelorette.

Nowadays, many Bengali weddings incorporate the concepts of Sangeet and Mehendi from North Indian weddings and combine them with Ai Budo Bhaat.


Held at the dawn of the wedding day, the family members and close relatives of the bride/groom visit a nearby water body (preferably River Ganges) to fill a pitcher with water and return. This water will be used late during the Snan ritual.

The would-be couple is then fed curd, rice flakes, banana and sweets at their respective homes and are asked to undergo fasting after this meal until their wedding is solemnized. Usually, the mother or any elderly married women feeds the bride/groom. People from former East Bengal call this function as “Adhibas” instead of “Dodhi mangal”.


This ritual is conducted on the morning of the wedding day just before the ‘gaye holud’ ceremony at the respective homes of the bride/groom. The Pandit chants Vedic mantras and the family pays homage to their seven generations of forefathers. A small puja is conducted for the well-being of the ancestors in their afterlife and seek their blessings.


On the morning of the wedding day, both the families exchange gifts called Tattva to each other. The members from the groom’s family present a new saree which is to be worn by the bride during ‘gae holud’ along with oil, a big, decorated carp or rohu fish, personal grooming and toiletry products, sweets and other delicacies. A lot of care and consideration is put to the number and decoration of the ‘Tattva’.

A turmeric paste is made from grinding fresh turmeric with mustard oil. This paste is applied on the groom’s body by his mother and other married female relatives. This ceremony is called “Gae holud”. He is then asked to bath in the water procured in the morning. The remaining turmeric is carried along with the Tattva to the bride’s home and is applied to her body. She is then bathed in the water taken from the water body in the morning.


Shaka paula or Sankha Porano of Sankha Pola have prominent importance in the Bengali marriage. The literal translation is Sankha (white conch case bangles) and Pola (bittersweet red coral bangles). The bride is asked to wear conch shell bangles on the day of “Ai budo bhaat” or on the wedding day or during the “Gae holud”. These bangles carry a similar significance to ‘Mangalsutra’ that represent married women.


Bengali Hindu wedding Rituals have an auspicious time frame called the “Lagna” within which the wedding ceremony takes place. The wedding procession is led by the groom towards the wedding venue in a luxury caravan sent by the bride’s family. This group is called the ‘Bor Jatri’. A car is sent separately for the groom which is the front-runner of the caravan.

At the entrance of the wedding venue, the bride’s mother along with other elders wait to welcome the group. She applies Tilak from the Baran Dala on the groom’s forehead and does an Aarti and welcomes him and other guests.


As per the traditional Bengali attire, the groom wears a pleated Dhoti and Kurta. He is seated at the Chadnatala (the centre stage of the Mandap) where the marital rites will be performed. The bride’s maternal uncle gifts the groom new clothes to wear during the wedding rites. These clothes are known as ‘Potto Bostro’.

In Sylheti weddings, the Mandap is given a special look called Kunja and looks beautiful.


The bride arrives at the ‘Mandap’ where the groom is already seated with the Pandits. What makes this ceremony unique is the fact that the bride sits on a wooden stool called a Pidi. Her brothers and close male relatives then lift the bride while she is sitting on the pidi and carry her around the groom, who sits in front of the sacred fire, seven times in a row.

During this ritual, the bride covers her eyes with a pair of betel leaves. Only after the Saat Paak is complete will the bride uncover the betel leaves off her eyes. Soon afterwards, in the presence of the elders of both the families, the bride opens her eyes looking towards the groom. Their eyes meet amidst the blowing of conch shells and ululation which is called “Subho Drishti”.


After Subho Dristi, the next ritual is ‘Mala Badal’ (garland exchange). The bride seated on the Pidi is hoisted up by the brothers as the groom tries to exchange garlands with the bride. This is a fun and amusing ritual as the brothers try to hoist the bride as high as possible making it difficult for the groom to reach the bride’s neck. Enter the groom’s friends who lift the groom higher than the bride. A competition ensues between the two sides for a while while the bride/groom try to exchange Jaimala. This Varmala When the going gets tough, enter the friends of the groom in the frame! They then try to lift the groom higher than the bride and competition between the two sides continue for a while as everyone enjoy this friendly competition. The Varmala exchange is done three times thus accepting each other as husband and wife.


An elderly family member from the bride’s side hands over the bride to the groom. Their hands are tied together by a sacred thread and will stay in bounds till the rituals are completed. This ceremony is called Sampradan or Kanya Sampradan.

Yagya and Saat Paak (on foot)


The Vedic rituals invoking the presence of Agnidev or Fire God to sanctify the marriage is carried out by the Pandits. The couple sit beside the Pandits and carry out the instructions carefully.


In some marriages, the bride’s brother gives puffed rice or Khoi in her hands and the couple offers it to the holy fire. However, at most weddings, the bride stands in front of the fire with chaff in hand. The groom stands right behind her and holds the hands of the bride. The Khoi is placed on the chaff and by using the theory of winnowing, the Khoi is offered into the Holy fire. This ritual is known as Kusumdinge.

In Sylheti Bengali weddings, the bride needs to grind the Khoi with a pestle. This rite is done every time her brother hands over Khoi before offering it to the sacred fire.


Sindoor is what separates the married women from spinsters. The mark of matrimony, the groom puts a vermilion mark on the bride’s forehead and uses a new saree as a veil to cover her head.

Thus ends the Bengali Hindu Wedding Rituals upon which the couple is declared man and wife.

In this guide, we will give you complete detailed Bengali Hindu Wedding Rituals. If you had the good fortune of witnessi ...

Significance of Mehndi in...

In this article, we will discuss the Significance of Mehndi in Indian Wedding. Remember the song, “Mehndi laga ke ...

Courtship period is one of the best phases between wedding confirmation and the wedding day. It allows you to get to know eac ...