“Seetha Kalyana Vaibhogame, Rama Kalyana Vaibhogame”…!!! Iyer weddings are incomplete without the beautiful rendition of Thyagaraja composition that rejoices the wedding of Rama and Sita. This song symbolizes the bride and groom as epitomes of Sita and Rama.

In spite of the fact that the Tamil wedding customs and rituals differ, marriages in the Hindu tradition are invoked using Mantras from the Vedas to seek the blessings from the divine power and cherish the divinity in mortal humans. The ceremonies bind the couple as well as the families. It is also known to have a purifying effect on the body and soul as they enter a new phase of life together. 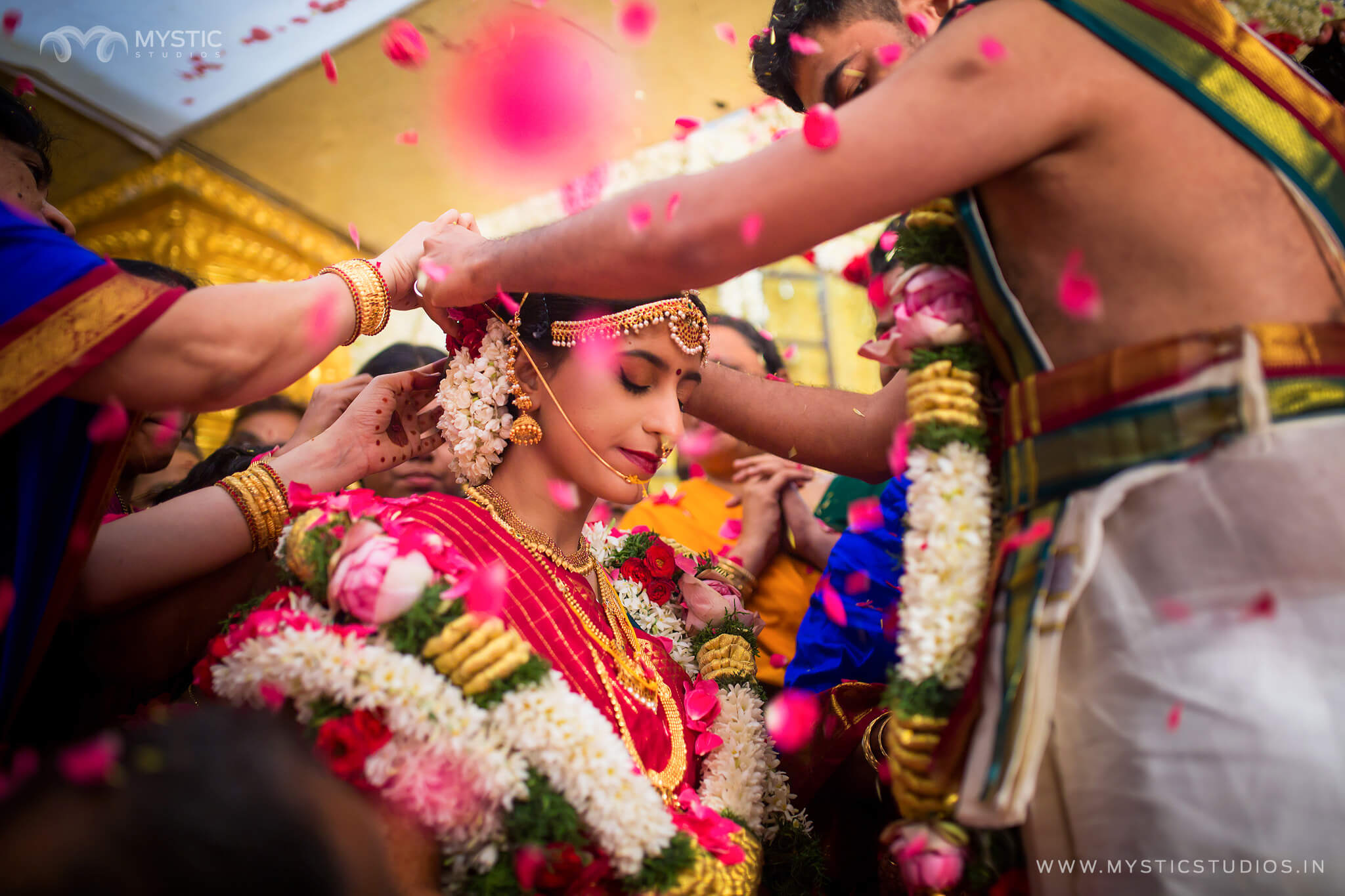 Grihasthashrama is named one of the most significant ‘samskaras’ among the 16 ‘samskaras’ which a person has to experience right from the formation in the mother’s womb until death.

A traditional Tamil brahmin wedding is a merger of Vedic sacred writings (Vaidika) and practical acceptance (Loukika). Though the core marriage rituals are Vedic, Loukika practice differs and may not be equally followed by all Iyers. This is because customs and practices followed by individual families may be unique.

That said, here are few of the common pre-wedding and wedding rituals of every Tamil Iyer wedding events.


Matching of the horoscopes of the boy and girl is a vital step. When the marriage is fixed, the “nischayadhaartham” i.e. the engagement ceremony is held on an auspicious day. After invoking the blessings of Lord Ganesha to remove all obstacles, an exchange of ‘nailkera’ (coconut) and ‘thamboola’ (betel leaves and areca nuts) is conducted in the presence of elderly family members from both the families. This is called “vaang nischaya” (commitment by word).

The reading of the ‘lagna patrika’ about the date, day, time (muhurtham) and the place of wedding is finalized. It is signed by the representatives of both the families. This is now an addition to the ‘Nischayadhaartham’ and has now become part of the ceremony.


This is a prayer done by the married women invoking the blessings of female ancestors who had passed away as ‘Sumangalis’ (i.e. died before their husbands). Sumangalis are invited (friends, family or acquaintances) and are supposed to represent the ancestral ‘sumangalis’. They are worshipped and fed as per the customs. Alongside sumangalis, a ‘kanya’ is also revered who also participates in the feast.

The sumangali prarthanai is done by the bride’s family before the wedding so that the daughter can receive blessings from her ancestors. In case of the groom, it is done after the marriage so that the new bride too can participate in the custom.


The bride and the groom are invited by their respective aunts i.e. Mother’s brother (Mami) and Father’s sister (athai) where they are treated with a traditional feast called ‘Pongal’ which is made of rice, lentils and turmeric. This feast is prepared by the elders as they bless the bride and groom who will be soon entering into a family of their own.


The very first ritual of Tamil Hindu wedding, all the elderly family members participate in this ritual. A tall wooden stick or bamboo pole with plantain covered decoration is placed outside the homes of bride and groom. Special prayers are offered for smooth conduct of wedding. It is also a way of announcing everyone that there is a marriage happening in the house. It is one of the oldest rituals in Tamilian wedding and pursued even today by almost all Tamil families.


The groom and his family travel to the bride’s home (or the wedding venue). After praying to Lord Ganesha, they give ‘daan’ to Brahmins. This is to ward off any evils. It is also considered propitious to break a coconut before beginning the trip.

While earlier Tamil Brahmin Weddings was celebrated up to 4 days, it has now been customized to a two-day wedding schedule. These days, ‘mehndi’ and ‘sangeet’ ceremonies with Bollywood dances or regional movie songs have also become part of Tamil Brahmin weddings. Also, many wedding arrangements are now organized by wedding planners and event managers which gives the family a relief to relax and enjoy the wedding even more.


This ritual initially included planting a row of trees by the families of the bride and the groom. With evolving times, it changed from planting of trees to germinating seeds of various types of nine pre-soaked grains. A clay pot filled with nine varieties of grains is sowed in five clay pots for each for the bride and the groom’s side. The married women of the family pour water in the pot and allow the grains to sprout for the day. These are symbolic rituals where the pot is considered as houses, grains as the bride and groom while the sprouts specify fortune in the family. After a day or two the pot is immersed into the pond so that the fishes can eat the grains.


It is a small function carried out before the reception. The Tamil bride and groom arrive in an adorned car. They are brought to the Mandap in a grand procession combined with ‘nadaswaram’ and fire crackers. The rituals done during the ‘nischyadhaartam’ is repeated here. The bride’s family welcomes the groom while the bride’s brother applies the Tilak and presents him with sweets, flowers, clothes, jewellery etc. Both the bride and the groom are taken to the nearby temple to get blessings.


It’s the day of the wedding. The bride and the groom take a holy bath and are all set to tie the knot. According to the Hindu Iyer tradition, the groom has to pretend like he is leaving to Kashi to become a Sanyasi. In this ritual, the groom carries a bamboo fan, an umbrella, a walking stick, a ‘grantha’ (like the Bhagavad Gita), wears new slippers and set out to go to Kashi (Varanasi). But the bride’s father convinces him not to go to Kashi and offers to give his daughter in marriage to him so that he can return to be a ‘Grihastha’. The groom agrees and returns to the mandap for further rituals. 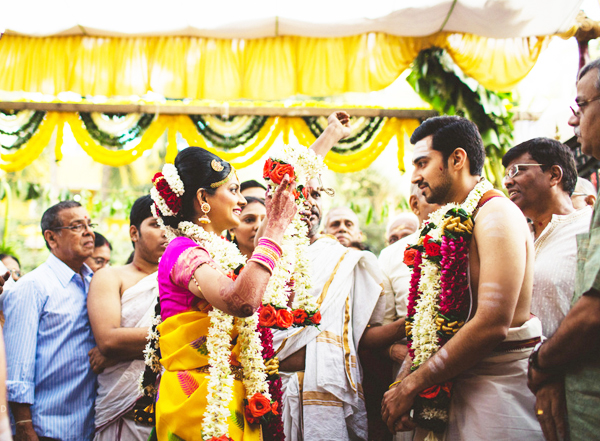 The bride arrives at the ‘Mandapam’ and then garlands are exchanged by the bride and the groom. The groom leads the bride by holding her hand to a decorated ‘oonjal’ i.e. swing. As they sit on the swing, married women wash the couple’s feet with milk by sprinkling some milk on their feet and wiping it with the edge of the saree. The women then wave coloured rice balls around them and toss these balls in all directions to ward off evil. The bride and the groom are given a mixture of milk with banana pieces. This is to ease the tension of the marriage. Women sing songs on this occasion.

It is then followed by the ‘vara poojai’ where the bride’s father welcomes the groom and washes his feet with water. The groom commences the marriage rituals by offering a prayer to Lord Ganesha.


The ‘Gothrams’ of both the bride and the groom are announced loudly by the Pundit along with their lineage up to three generations (father-grandfather-great grandfather).


The bride sits on the lap of her father who holds a ‘thamboola’ (betel leaves and areca nut) in his palms. She then places her palms holding a coconut on her father’s palms. As the groom receives the bride’s hand from her father, the bride’s mother pours water over her daughter’s hand which is made to fall the ground like a ‘dhaara’. This ritual is called ‘dhaarai vaarthu kodukkal’ in Tamil. The mantras recited by the bride’s father symbolize the groom as an embodiment of Lord Vishnu. The Gothra of the bride is changed to that of the groom.

This is an emotional moment for the father-daughter duo as it indicates that he is giving away his daughter he raised so lovely and his official approval to give his daughter away to the groom.

The groom then gives the ‘Koorai podavai’ – a customary nine-yard red colored saree to the saree. However, colour of the saree is not necessarily red and can be of other colors as well. The ladies take the bride to drape her in Koorai Podavai for Mangalya dhaaranam.


The bride returns draped in the Koorai Podavai and sits on her father’s lap once again. The ‘Mangalya’ or ‘Mangal sutra’ refers to twin pieces of gold (one given by her father and one by the groom’s family) designed as per the family custom of the groom. It is arranged on a yellow-coloured string/thread that is tied around the bride’s neck in three knots. The groom ties the first knot of the Mangalya around the neck of the bride while his sister ties the remaining two knots.

Tying of the Mangalya is done amidst the crescendo of the ‘Nadaswaram’ and ‘Ketti melam’ as the relatives and invitees shower ‘akshadhai’ {rice smeared in turmeric) and flowers on the newlyweds.

The groom ties a rope made of ‘dharba’ grass i.e. Kusha grass around the bride’s hip praying for her to be blessed with good health, children, wealth, and prosperity. He leads the bride holding her right hand and sits in front of Agni (sacred fire). The groom’s sister adorns the bride with silver toe-rings (Metti in Tamil).


The groom takes the right foot of the bride and makes her take seven steps (Sapta-Padhi) with prayers for her joy, health and wealth. The groom and the wife circle the Agni. An ‘Ammi kal’ (grinding stone) is kept in Northern side of the fire. The groom takes the toe of the bride’s right leg and places it on the stone. When they return to sit in front of the fire, the bride’s brother puts two handfuls of puffed rice in her hands which is then offered to the ‘Agni’ by the bride and groom with a little amount of ghee. This ritual is repeated thrice.

Another interesting custom is when the newlyweds are asked to take a look at the two-star constellation of ‘Arundhati’ and ‘Vasishtha’. This is part of the bigger ‘Saptarishi’ or ‘Big Dipper’ constellation. This pair is considered to symbolize marriage and were considered an ideal couple.

After completion of mantra chanting, the groom removes the ‘darbha’ rope tied around the bride. The newlyweds seek the blessings from the elders present at the wedding.

It continues with the first visit of the new bride to the groom’s place and of the groom to the bride’s place. Female relatives give them ‘paalum pazhamum’ i.e. a mixture of milk with bananas. A ‘nalangu’ ceremony may be held either at the wedding venue or at the groom’s residence, wherein the bride and the groom are made to play some fun games. It is more of an ice-breaker between the husband and wife.

These rituals are usually followed by a grand reception for the bride and the groom by family and friends. Some opt for Carnatic music and dance performances (either by professionals or family members and invitees) that are part of the celebration.

Thus ends the Tamil Brahmin wedding. Apart from the extensive blend of Vedic and ‘loukika’ traditions, Iyer weddings are also a kaleidoscope of colours and rhythmic fusion of sounds. The chic Kanchipuram sarees, the tinkling of Indian traditional jewellery, the scent of jasmine flowers, and the varying octaves of the nadaswaram ’and‘ ketti melam during the wedding rituals and the aroma of a grand, sumptuous feast served on banana leaves is sure to mesmerize you. Invitees are normally bid farewell with a pack of treats such as sweets, savories and coconuts with ‘thamboola’ (betel leaves and areca nuts).

In this guide, we will explain everything about Kerala Intercaste Marriage scheme, how to file for intercaste marriage, its ...

In this article, we share Balloon Wedding Decoration Ideas you can use on your Indian wedding. Balloons are not just for ...