In this article, we will walk you through the magnificent journey of Nikah – Kerala Muslim wedding rituals.

Islam is one of the prominent religions in the world with more than 1.6 billion followers. Wedding is a fundamental part of Islamic culture. It is ordered by the Holy Quran as one of the essential duties of a Muslim as a way to carry on the progeny. Muslim wedding traditions differ as per countries and regions but in its heart, ‘Nikah’ ceremony remains the same. In India, there are more than 172 million people who follow traditional Islamic wedding rituals. Let’s take a look at the various customs of Islamic wedding tradition.

Initially, a marriage proposal is initiated via family or friends’ reference. In today’s techie world, many Kerala matrimonial sites carry the responsibility of helping two individuals finding a life partner online. Once the meeting is successful, few close relatives from the boy’s side go to the girl’s house to establish the suitability of the girl to the boy. Similarly, the girl’s family is called upon to visit the boy’s house to ascertain the boy’s family.

If both the parties are satisfied, the next step is Valayidal.


The typical Kerala Muslim wedding rituals start with the ceremony called “Valayidal” function. Valayidal function is done as the groom’s family visits the girl’s house and presents her with a bangle. The Valayidal ritual is led by the groom’s mother who gifts her future daughter-in-law gold bangles and ornaments.


The next step in a traditional Kerala Muslim Wedding is when two families come together to fix a wedding date. Usually, this happens in the groom’s house in front of a priest (Maulvi) from the local mosque. After mutual discussion and agreement, they fix an auspicious date for the wedding.

The bride and the groom will be at their own houses. In the Haldi ceremony, the friends and family apply haldi on their hands and feet. The night is luminous with everyone singing conventional melodies and having a ton of fun together. After taking a bath, the bride is adorned in traditional wear all set for the Mehndi ceremony.

Mehndi ceremony plays a vital role in traditional Indian weddings. In Kerala Muslim marriage tradition, mehndi ceremony is known as Mailanchi Raavu. This is a fun night on both the bride’s and the groom’s house where friends and family gather around and celebrate with singing and dancing. The Mehndi artist decorates the bride’s hands and feet with gorgeous designs.

The groom’s sisters alongside few family members arrive at the bride’s house on this pre-wedding eve. The bride will is dressed in traditional attire as she is seated in the middle coyly. They adorn her hands and legs with mehndi designs and sing Mappilapattu playfully teasing her and praising her beauty. They also play ‘oppana’.

People from the bride’s side put Mehndi on one hand and the groom’s family on the other hand. A similar function takes place at the groom’s home as well. However, instead of applying mehndi on hands, it is put on the top of a leaf in his palm.

Following the old age tradition, the bride and groom are not allowed to step out of the house after this ceremony until the wedding day. 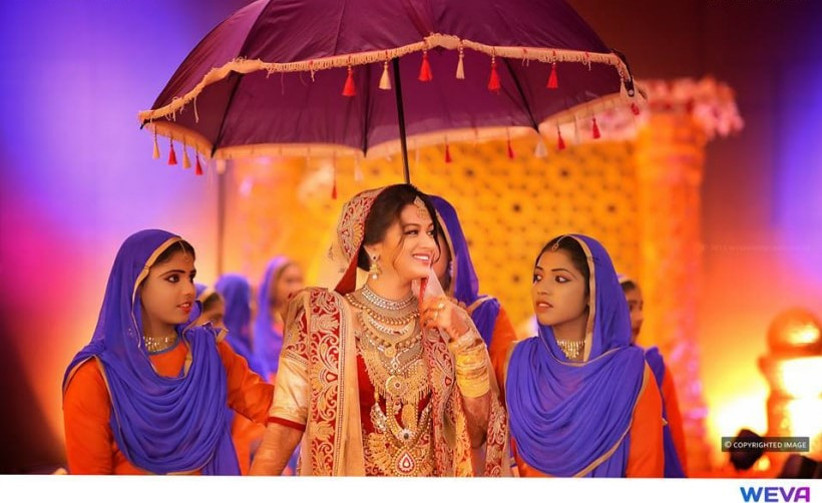 
On the day of the wedding, the groom arrives with his relatives, family members and friends to the venue. There is a huge procession of the baraat that accompanies a band that plays various customary music and tunes. The bride’s family welcome the groom and family with sherbet. They additionally sprinkle rose water on the groom and guests presenting them with flowers.

Kerala Muslim Bride on her wedding day – Jewellery and Attire

The bride wears three kinds of necklaces – the Padi Mala, Aalochana Mala and the Chakrakanni Mala. All these three neckpieces are heavily embedded with precious gems and stones and carry great volumes of gold. Studded earrings are an absolute must for the wedding and are known as Alicathu, Pachakallu, Mekkath and Jhimiki.

The bride’s head and forehead are also beautified with gorgeous jewellery called Nettipattam, Mudipoo, Matti and Mudichakram. The waist belt is a broad one that is made from gold and is rich with gems and stones. The waist belt is called Arappatta. It is combined with various kinds of intricately decorated and carved bangles that adorn the bride’s hands and accentuates her look. They come in different varieties, for example, Thari Vala, Thol Vala and Kannadi Vala. Studded rings enhance the magnificence of her fingers and the gold mehndi handset covers the back of the palm completely.


The groom wears a traditional Sherwani or heavy embroidered kurta with churidar pyjama. He may also opt for a more Western suit outfit. According to the traditions, the groom may wear a floral veil of roses during the wedding ceremony.

The main Malabar Muslim wedding ceremony is an official agreement that takes place between the bride and the groom’s father. During the Nikah, the Qazi initiates the proceedings with a sermon and prayers from the Quran.

The bride’s father offers the hand of his daughter to the groom. This is followed by a proposal of the groom to the bride. The Qazi passes the message to the bride through a ritual known as Ijaab. The bride gives her consent in return to the proposal by saying ‘Qubool’ (Yes). When it is ‘Qubool’ from both the bride and the groom, the Nikaah is said to be complete.

After the Ijaab-Qubool ritual is complete, the groom gifts a Mahr (cash, gold or any movable objects) to the bride which is a promise that he will look after her needs and fulfil his duties as a husband. It stands for the commitment and responsibility of the spouse towards the wife after marriage.

The most intriguing part of Nikaah is that during the entire wedding rituals, both the bride and the groom’s heads are covered with a cloth and they cannot see one another.

After the Nikahnaama is signed, the new couple is made to sit on the stage where everyone approaches and congratulates the newly-wed couple. After meeting the family members and receiving gifts, the Qazi asks the couple to repeat some prayers after him. The Holy Quran is kept between the couple and they are still not supposed to see each other directly, but only through a mirror. This completes the wedding ritual.


A tearful and emotional moment, Ruksat is a ritual where the bride leaves her parent’s house and goes to her groom’s house. Upon reaching the groom’s house, the groom’s mother welcomes the couple to the house by placing the Holy Quran over the head of the new bride. After entering, the bride seeks blessings from the elder members of the family.

Chauthi – After four days of the wedding, the bride visits her parent’s home where she is welcomed heartily by her parents and close relatives.


In the wake of completing 5 days of marriage, the husband’s family hosts the walima i.e. a grand reception. This is also known as Daawat-e-Walima. Friends, family members, and relatives are invited to the reception and a grand feast is offered.

Just like any other state, Kerala is a land with people of different religions who live peacefully and come together at weddings. This is what a traditional Kerala Muslim wedding is all about. Now you know what Kerala Muslim wedding rituals are and how a couple begins their new life with the love and blessings of family and friends.

In this article, we give you 11 questions to ask when choosing a life partner on online matrimonial sites in Kerala (India). ...

How to Register a Marriag...

Marriages are matches made in heaven but registration are done here at Earth. If you are getting married in Kerala, they ar ...